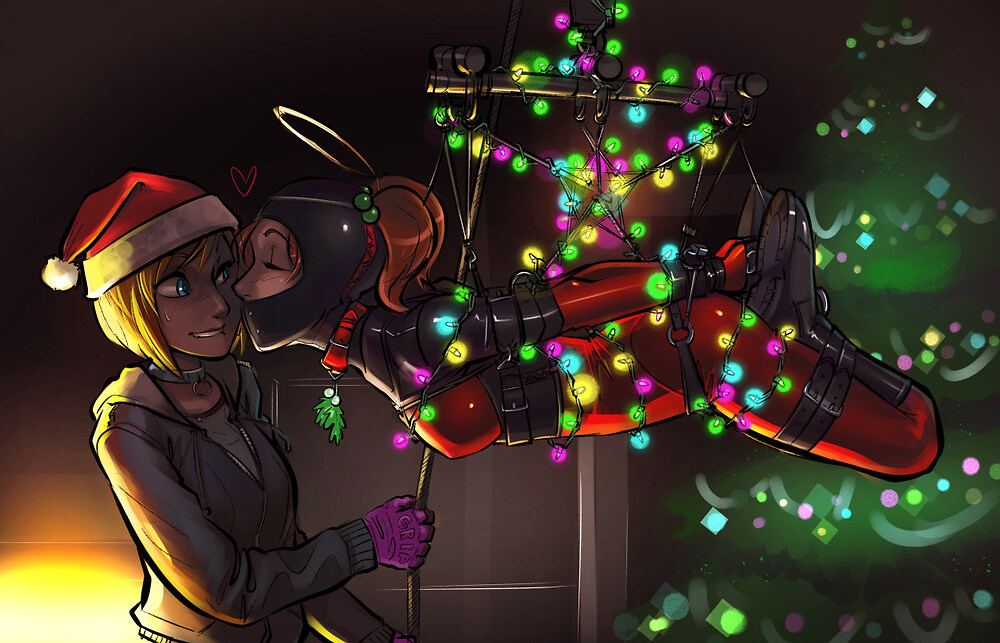 After a long and fun date, Esther and her boyfriend; Ivan and their toucan pet; Tiwanaku finally arrived at home at very calm and snowy dusk, a it was perfect date.

“Uhhh… i think i’ve lost something in the bags, let me check it a bit.” said Ivan.

“Okay then, i also have surprise for you too, hehe… just stay and wait here…” said Esther.

Esther winking and then run into her room…

“Huh? Eh? Hehehe… whatever… Hmm… where I put that thing anyway…” Ivan still checking the bags.

“Errr… you not pick up that right?” said Ivan to Tiwanaku.

Tiwanaku doesn’t know, he then fly over from Ivan shoulder and help him out.

Minutes later, Ivan tidy up the items and finally found it…

“Hooo… there you are…” after Ivan said that, Esther appear from other site of room

In front of him with her new cute appearances…

Ivan and Tiwanaku halted and amazed.

“Hehehe… What do you think? I’m ready for it… you know what i meant? Eh?” said Esther with blushing while pretended to cover her body with her coat very timidly.

“Ohhh… yeah… we might get into that… hehehe…. Oh my, you really good with that costume.” Said Ivan scratched his head and blushes.

Ivan and Esther are solid and consensual bondage partner for long time, it ‘hobbies’ that actually make them get along and closer.

But this time, Esther appear to be really different that make Ivan so amaze.

“Yep, sure it is, hehehe…” Esther smile broadly.

“I didn’t notice you bought those handcuff things, hehe…” said Ivan when Esther show some of cuffs she brought along.

“I know it be on your secret wish list, so I bought for you only my love, when you was looking for new shirt, tee hee… I am your secret santa now?” Said Esther.

She then kneeling, wear these handcuffs on her hands and then show it to Ivan.

“Look, I am your bondage princess now?” said Esther in front of him.

“Ah yes, you really the one I trusted, hehehe…” said Ivan.

Esther stand up, hug and cuddle on Ivan, and Ivan hug her back while pat her heads, its very warm and comfortable hug for happy Esther, the bondage princess.

Tiwanaku fly over around them, he also happy know that his partners is also happy too.

“Hehehe, come over, I know you’ve been waiting for this…” Esther invited him to her room.

“Make your wish, Ivan it be good be night for us…” said Esther while looking at the window, then she come to kiss his cheek and offer her hand to him.

“Sure, love you too Esther.”

Esther grab her hand and bring it into bed. Esther lying into bed.

“I think it be good if we do little roleplay, Ivan…” said Esther spoiled.

Esther start to stretch up her body, her arms goes up and her legs closed pulled down, showing her lovely body to Ivan and it really amazed and inspires Ivan.

“You’re so gracious today, I have so many ideas today…”

Then they kiss each other, fall deeply into enjoyment of love.

Esther wiggle her body enjoying her bond with Ivan, while Ivan enjoy her gracious body.

After kissing for long time,Ivan then kiss her neck and nibble her ears…

Ivan kiss and lick her neck…

Then they kiss their lips each other, Esther closed her eyes, they enjoy the kissing for minutes.

“Ahhh….. what you gonna do with this helpless princess?” said Esther while she pretended to being kidnapped princess.

Esther stretch her body, spread her arms and legs around, look like she know what you want to do with her.

“Ahhh… my body is display, full display, they can do everything on me if I can’t escape from this.” said Esther.

“Look at this vulnerable princess, you don’t take advantage of me do you? Said Esther, asking Ivan to do something with her.

Ivan grab the handcuffs and collar. Then he put the collar on her, very strict.

Then Ivan put the handcuff on her arms and legs and pull these so it make her body spread out,

Esther surprised, she tried to pull back her arms and legs but he tied the bind to tight. Esther enjoy it and she struggling and wiggling enjoying her bondage and distress.

Her body is exposed, she can’t help herself, she blushing and try to pull back but it no use…

“Hehehe… help me, this princess is spread out and her is body exposed, help me before he play with this helpless princess, hehehe….” Esther keep struggling with herself.

“Please gag me, you don’t hear me screaming and moan right? Ahhh, my body is exposed and playful. Help me my prince…”

Ivan kiss her again while tickling her body, Ivan then put cleave gag on her…

“Hmmmphhh…. Hmmm…. Hmmm…..” Ivan can hear her beautiful moan, she really enjoy her bondage, no one can stop her, nor help her this time.

Ivan head pat her, trying to calm her….

Ivan then kiss her forehead and cuddle her exposed and helpless body.

Esther feel so warm and she let Ivan enjoy her body up and down, this also make extra submissive sensation and cause her goosebumps.

She struggle, pull the handcuff and wiggle while Ivan cuddle on her body, he also tickle her.

Then she jolted, she reach it….

“Hmm…. Hmm… Hmm….” Esther panting, she close her eyes, take a break, her spreading body are sweaty all over place.

She still cannot help herself.

“Aummphhh…. Hmmmphhh….. “ Esther then struggle for her bondage enjoyment, she pretend herself to be kidnapped and owned princess.

“Ahhh… sorry if I was too rough for you, let’s do soft this time.” said Ivan while kiss her forehead.

“Hmmmppphhhh…..” Esther blushing and smiling on her. She want more from him since she really enjoy this spread bondage so much.

Esther snapped her fingers, she try summon Tiwanaku. Then Tiwanaku come and offer Ivan a feather…

She look cute with that gagged smile, that make them love each other at first time.

“Hahaha, you’re such stubborn Esther are you…” said Ivan grimly.

Esther spread her body, display her body for him, then she let Ivan tickle her with the feathers.

Esther skin is sensitives, she jolted and panic when that little feather strike her belly, waist, hips and open exposed armpit. It attack all of her weakness part.

Esther love tickle torture, so he keep tickling her because how Esther have big enjoyment on it.

“Hmmphhh!!!! Mmmphhh!!!!!!!” Esther can’t help herself but to moaning expressing her enjoyment.

Hours after the tickle torture, Esther lying on her bed while still on that spreading position, this time her binds are so tight that she now can’t move at inch and her gag still on her.

Esther panting, close her eyes, imagine another fantasy she have.

The room is already dark, and its cold too but it seems doesn’t really bother her. Tiwanaku can be seen sleeping on her desk next to her bed.

“Hmmmphhhh??? Aumph! Mmmph!” Esther surprise and she happy to see him again.

Ivan lay himself on bed next to Esther that still trapped there in that spreading position, this time she can’t move at all.

He hug her and give kiss on forehead.

“Good night my princess, hope you have good bondage dream there….”

Ivan then sleep on her chest, while Esther while calmly and humming a serene lullaby.